Late October is a time for devils and goblins, horror movies, tricks, and treats. If you’re a Lewis reader, you may spend time in The Screwtape Letters as a way to usher in All Hallow’s Eve, as well as the more important, All Souls’ Day. I picked up the masterfully annotated edition of Lewis’s book that HarperOne released a few years ago.

Have you ever wondered if the patient in The Screwtape Letters could actually see Bus #73 from the British Museum? Remember? It’s when Screwtape distracted him away from his curiosity toward the things of God. How about the name Wormwood? Is there a reason for it? Sole colbert. Do you know what it is? I learned it’s a fish dish named after a member in Louis XIV’s court. Screwtape brings it up in a list of possible indulgences in Letter #17. It’s wedged between tea and cigarettes. Fun trivia. 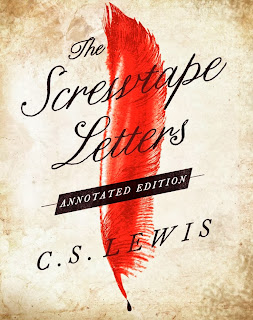 The annotated edition of The Screwtape Letters is wonderful–and not only for the triviality mentioned above–but also because it does what the introduction says it would do: (1) it places the author’s work in its historical context; (2) it helps to illuminate themes and ideas that would be explored in other works by Lewis; (3) it helps an American audience, especially, realize the meaning of English phrases or words that are not common–then or now–in the States.

The introduction is humble. I think this edition provides much more.

I want to add three additional reasons: (1) the pointers to Scripture and the references to Anglicanism; (2) the careful citing of literary works that Lewis gleaned from or mentions in passing; (3) the many references that point to Lewis’s other works and letters, which help to round out the idea in Screwtape.

It should be expected that Lewis carries the influence of many literary figures into his work, given his work at the university. Dotting through the annotations brought out this list, in no way complete: Chaucer, Kant, Dickens, Byron, Spenser, MacDonald, Milton, Homer. It’s an important grounding effect to a tale about demons exchanging letters. In the preface (and both the original 1941 and the 1961 reprint are included) there are many references to authors who Lewis uses to uncover the idea of cosmic warfare, among other things. (The prefaces are annotated too!)

“The real trouble about the set your patient is living in,” writes Srewtape in Letter #25, “is that it is merely Christianity.” Mere Christianity would be published in 1952, adapted from BBC radio talks from 1942 and 1944. The annotation says that the term mere Christianity can be attributed to Richard Baxter who wrote, “I am a Christian, a mere Christian, of no other Religion; and the Church that I am of is the Christian Church.” In the letter, Screwtape takes up that exact charge. If Christianity can be “Christianity and” then sufficiency is done away with, being replaced by the need for shifts and changes in order to find contentment.

So much is compressed into this edition, with the annotations nicely placed in red alongside Lewis’s text. I encourage you to pick up this edition whether you have Screwtape or not. It’s a nice way into other authors, Lewis’s writings, and most importantly, the Bible.

Here’s where to get a copy.

Now, to the trivia questions I started with: It’s debatable about Bus #73, but you likely could not see it. Apparently Lewis thought of changing the reference in the 1961 edition. Scholars steeped in Lewis might know where Wormwood’s name originates. If, however, you are not of that ilk, you might be interested to know that it’s a woody bitter shrub used in medicine. It’s also a word Lewis uses as a name for Satan in The Pilgrim’s Regress. It’s also referenced in Revelation 8:10-11: “The third angel blew his trumpet, and a great star fell from heaven, blazing like a torch, and it fell on a third of the rivers and on the springs of water. The name of the star is Wormwood. A third of the waters became wormwood, and many people died from the water, because it had been made bitter.”

And about sole colbert: it’s for the upper echelon, and Lewis uses it to reference the delicacies that the demons discuss to tempt their patient into putting on heirs.